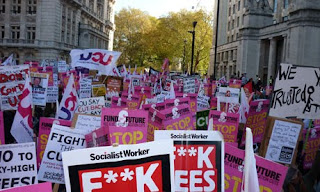 National Demonstration against education cuts, fees and to save EMA – January 29th, assembling at 12noon

The student uprising against the Tory-led assault on the welfare state has been breathtaking.

The vote to treble tuition fees has gone through – but this is not the end.

Savage cuts, higher fees and the scrapping of EMA will have devastating consequences for young people.

Our movement has sent a clear message to the government: we will fight your immoral and illogical cuts. Now we must turn the heat up even more.

The national demonstration on January 29 in London has called by the National Campaign Against Fees and Cuts, the Education Activist Network, the University College Union (UCU) and is supported by the Free Education Campaign.

On the same day there will be a TUC rally and demonstration in Manchester supported by UCU and PCS youth network which we also encourage activists to attend if they cannot make it to London.
Posted by Free Education Campaign at 7:57 AM